The company has pointed out that due to COVID-19 restrictions this year, Halloween is set to look a little different, with more people looking to games and in-home scares rather than going out and about for trick or treating and halloween activities.

Five Nights at Freddy’s AR, an augmented reality-based survival horror game where animatronics jump out at users in their own homes, was one of the first game titles where AR was core to the gameplay, rather than an optional feature, which helped to create a new style of horror gameplay.?

The latest Halloween updates to the game include:

Introducing new modes of mixed reality gameplay – While players still have the experience of seeing the animatronics in their real world environment, certain characters will take users into a virtual world, right from their phones.

In addition, the company has also introduced innovative AR Interactions to the game, including new mechanics that leverage sound, motion, visuals, and even user actions to deepen immersion in the blended digital-real world. For example, users can locate and ‘pick up’ digital objects, have real objects trigger digital content, or are forced to be still or move to increase their levels of involvement and immersion with the brand.

Illumix added that in order to develop interactive experiences from the camera-first perspective, it has meant looking at the user experience through a fresh lens and creating original AR technology. The company has therefore been developing its proprietary AR engine to allow it to continue building MR games with greater reach. Illumix added that as a result it anticipates that much like Unreal Engine did for Epic Games, its own platform is “set to become the primary platform for any company looking for AR-first content & next-generation media.”

Illumix pointed out that over the last 6 months, FNAF AR has continued to go from strength to strength, with the company noting some of the following milestones:?

FNAF AR generated over 7 million downloads, organically with no money spent on marketing or user acquisition;

Featured as the overall Game of the Day on iOS;

More than 1 year of total time spent in the AR experience on average by users per day;?

69% of daily time spent in the app is spent actively engaging with the camera mode (compared to ‘AR-optional’ games where a players have the option to turn off the AR mode entirely);

Illumix has secured USD $13 Million in funding to date and is actively growing/hiring, with revenue, monthly active users, and daily active users increasing month on month, according to the company.

For more information on Illumix and its augmented and mixed reality engine and titles, please visit the company’s website. 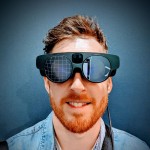 Sam is the Founder and Managing Editor of Auganix. With a background in research and report writing, he covers news articles on both the AR and VR industries. He also has an interest in human augmentation technology as a whole, and does not just limit his learning specifically to the visual experience side of things.

Snap Inc. introduces its next generation of Augmented Reality Spectacles